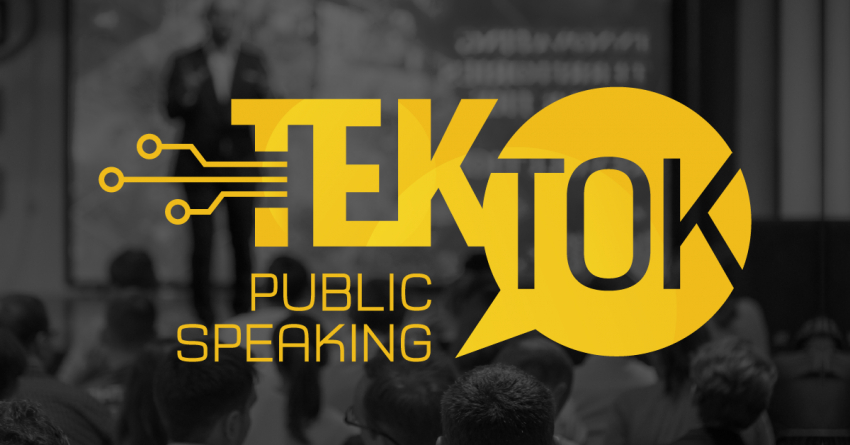 “According to most studies, people's number one fear is public speaking. Number two is death. Death is number two. Does that sound right? This means to the average person, if you go to a funeral, you're better off in the casket than doing the eulogy.”—Jerry Seinfeld

Public speaking doesn’t have to be what you fear most in your lifetime, or your career. From shortlist interviews to speaking at a conference or an informal presentation to colleagues, it’s important to break a speaking opportunity into steps and components. Brushing up on some of its terms can help with that. As you prepare, consider these terms as tips and tricks to create a more cohesive message.

Anecdote: a brief account or story of an interesting or humorous event often used to grab or maintain attention and establish an investment in the speech’s ideas or the speaker themselves.

Attention getter/Hook: the statement or question that piques the audience’s interest in what you have to say at the very beginning of a speech.

Central Idea Statement: a statement that contains or summarizes a speech’s main points.

Clincher: something memorable with which to conclude your speech.

Extemporaneous Speaking: the presentation of a carefully planned and rehearsed speech, spoken in a conversational manner using brief notes.

General Purpose: the broad, overall goal of a speech—to inform, to persuade, to entertain, etc.

Impromptu Speaking: the presentation of a short message without advance preparation.

​​Internal summaries: a type of pre-transition that emphasizes what has come before and reminds the audience of what has been covered.

Lectern: a small, raised surface, usually with a slanted top, where a speaker can place notes during a speech.

Manuscript Speaking: the word-for-word iteration of a written message.

Memorized Speaking: the rote recitation of a written message that the speaker has committed to memory.

Monotone: a continuing sound, especially of someone’s voice, that is unchanging in pitch and without intonation—does not generate much interest or energy.

Rapport: a relationship or connection a speaker makes with the audience.

Rate: the speed at which you speak; how quickly or slowly a speaker talks.

Signposts: a type of connective that emphasizes physical movement through the speech content and lets the audience know exactly where they are; commonly uses terms such as “First,” “Second,” “Finally.”

Specific Purpose Statement: indicate precisely what the goal of a given speech is; builds upon the speaker’s general purpose.

Transitions: serve as bridges between disconnected (but related) materials in a speech and allow for the smooth flow from one topic to another; relate to the audience what one idea has to do with another in a brief sentence or word. Ex: “Due to these issues,” “On the other hand,” “Additionally,”

Vocal Cues: the subtle but meaningful variations in speech delivery, which can include the use of pitch, tone, volume, and pace.

Vocalized Pauses/Fillers: unintentional pauses that incorporate some sort of sound or word that is unrelated to what is being said; “uh,” “um,” and “like” are well-known examples. Known to reduce the professionalism of a speech.

Volume: the relative softness or loudness of your voice.