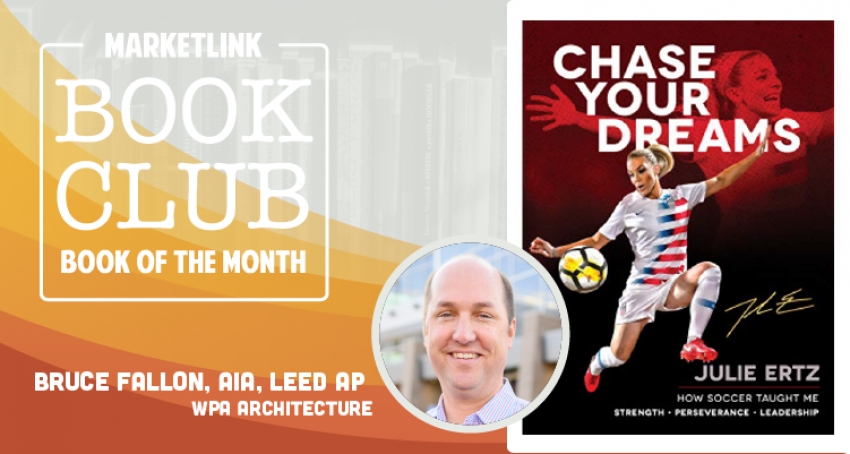 "Chase Your Dreams" by Julie Ertz

Bruce Fallon’s family loves soccer, and one of their favorite players on the United States Women’s National Team is Julie Ertz--a member of the USWNT’s back-to-back World Cup-winning teams. When Bruce saw she had written a book about her experiences with soccer and how the game has impacted her life, he couldn’t resist picking it up.

Bruce coaches his daughter’s soccer team and strives to expose the players to positive female role models. As U.S. Soccer's Female Player of the Year for 2019, Ms. Ertz is an accomplished example.

As a busy professional looking to read more, this book was ideal. “It was perfect,” he states, “long enough with good themes and ideas, but not so long that it took me a long time to complete reading. Bruce reveals. “The book was interesting and inspiring. Ertz does a great job mixing up sharing the principles for chasing her dream with the stories and experiences that taught her the principles.”

Bruce noted that this isn’t just a sports book. “She outlines several different themes that helped her achieve her dreams of playing professional soccer,” he states. “These themes apply to more than just soccer or sports, but to anyone striving to achieve something in their lives.” Each chapter can be read independently of one another. The themes cover topics such as your attitude, how you handle difficulties, your faith in a higher power, and your support system.

We All Need a Support System

One theme from Ertz that resonated with Bruce is the amount of support we need from others throughout the process of achieving our dreams. “For an athlete, support starts with parents driving to practices and games, providing financial and moral encouragement. And then there are those who make a difference as coaches and trainers.” Without this support system, her goals may not have been achieved. “We all have similar needs,” Bruce ponders, “starting with family and then mentors and others around us who help guide us to achieve our goals and dreams in life.”

Dreams and Visions are Inherently Valuable

When Ertz attended a USWNT game, the goal of a lifetime emerged. In the book, Ertz tells that she didn’t think that she was especially talented or any better than the average nine-year-old, but she was motivated. She writes, “Teammates and thousands of other girls went home imagining one day that we would be playing for the Women’s National Team. Did most of us make it? No, but does that mean it was a waste of a dream? No!”

And Bruce wholeheartedly agrees. “Dreams or visions are a valuable thing that many of us don’t think much about as we get further along in our careers. Ertz said that the value of that dream wasn’t in whether it came true, but in the hope and drive it gave her to keep going in the face of adversity,” he emphasizes. “This book has reminded me that having a dream or a vision for the future is something I need to think more about, regardless of how crazy a dream it may be.”

Bruce Fallon is a Principal at WPA Architecture, a full-service architectural design firm headquartered in Provo, Utah. He has worked in the AEC industry since 1994 and has been with WPA Architecture since 2005. Bruce is an active volunteer with the American Institute of Architects, having served at local, state and national levels.

More in this category: MARKETLINK Book Club: Captivate »
back to top